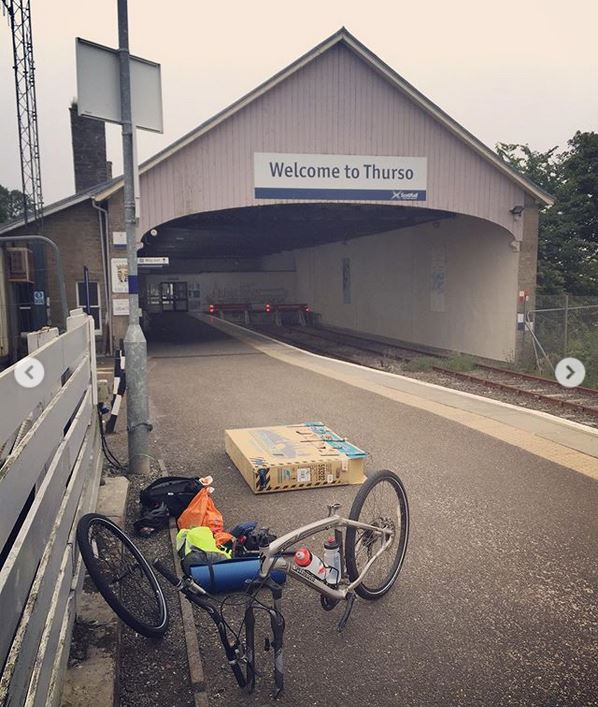 I have a story for you.

I took the 14 hour coach to Glasgow, I took the 7 hour train to Thurso and I cycled the 20 miles to John O’ Groats. But there is more to it.

I did my back in when running for the train to Thurso with my bike box. The bloke at the gate left me hanging until the final seconds before departure because I hadn’t reserved a bike space. He gave me the all clear and as I was running with my 72” plasma box something pulled in my lower back and I dropped it.

My legs went and I knew it was bad, but the train was about to go so I dragged the box along the platform and into the carriage. I leant against the wall and felt awful. The pain was serious but what really hurt me was the worry of whether I could get this trip done.

I phoned my friend Coxy for support and he told me I needed to jam something hard into the small of my back and sit down. I got my helmet and put it behind me, bought two shot bottles of JD, necked them, and just sat there.

The 7 hours were a tormented time. I had given it the big one two everyone I knew. I’m going from the top to the bottom of the UK and it will be a piece of piss. I had talked the talk, but now I wasn’t sure if I could walk the walk.

I made it to Thurso and slid the box off the train. I built the bike on the platform with wobbly legs, but it was manageable. I got the rucksack on and cycled the 20 miles to John O’ Groats.

I arrived at my starting point and headed straight to the most northern pub on mainland Britain. I met a bunch of gentlemen who arrived that evening having rode from where I was headed, Land’s End.

It was so good to meet champions of the journey, with peeling noses, no shoes on and walking like John Wayne. They told me their tales of the trip but more importantly for me they expressed their relief and joy of having completed it. The conversations and the beer took my mind off my back. I sat there and listened to them, I didn’t really know what they had been through, but I was about to find out.

I left the bar around 11:30pm and as I walked out it was still light. It turns out that every 100 miles you head north, the sun stays up for another hour. I was in the twilight zone.

I headed to the famous signpost to look for somewhere to lay my head. It was day 1 of sleeping under the stars. I should add that John O’ Groats was covered in mist and drizzle, so it was also day 1 of using my survival sack.

I slept okay but woke to something on my arm. It turns out that because I wasn’t a visible human, birds were comfortable standing on me and happily they didn’t shit on me.

I packed everything up and headed to the sign.