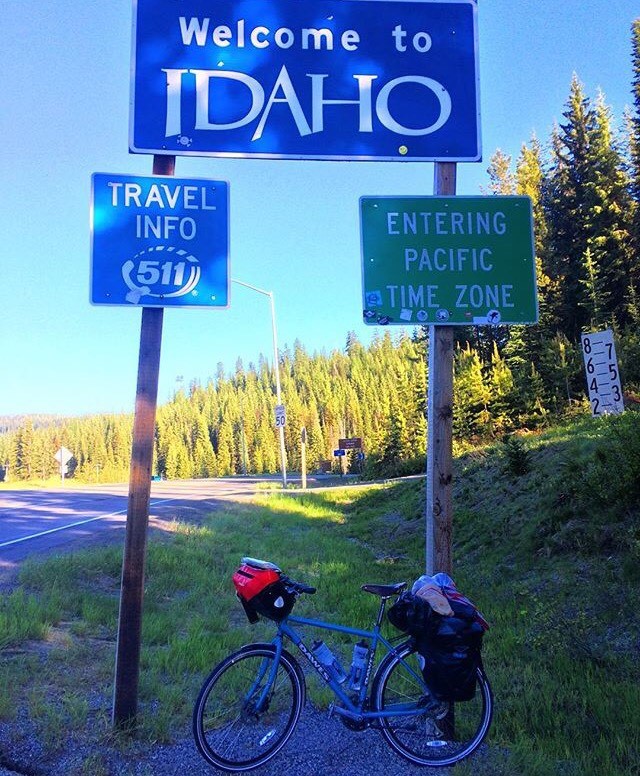 I can safely say it’s another town I’ve left a bit of my heart in, but the mission is the Pacific coast and the show must go on.

I had the maddest headwinds today, they drive me up the wall no matter how hard I try to let them travel through me.

After the frustration of the wind I was about to experience even more frustration with a mix of fear. As I cycled around a corner I got my first encounter with a black bear! He came out of the tree line right next to the road about 10 metres in front of me and as he did a motorcycle was coming and he ran from the noise down the verge on the other side of the road.

People here say you should act differently when confronted by black bears compared to grizzly bears. With a grizzly you’re best off playing dead and hoping it gets bored, on the other hand with a black bear you best be ready to fight as those things want to kill you.

As soon as I saw him I shouted “fuck off bear!” In a bid to scare him. Once he ran off I still thought he may turn around to investigate me, I had fresh deli food on my bike and if I was a bear I know I’d want it.

The frustration arose when I went for my bear spray, in Missoula I was like I haven’t seen a bear this whole time I’m packing this away. Sod’s law as soon as I packed it I came across one the same day.

I started tipping out my panniers like a mad man to find the spray and was just waiting to see that bear come back over the verge!

He never did come back so I repacked the contents of my panniers which were now all over the hard shoulder. I cycled another 10 miles to a restaurant where I had a big icy glass of Coke. When I walked in a woman said “wow you cycle fast, we saw you earlier.”. I said “yeah I saw a bear so I sped up.” She then told me that she saw him too and it turns out that she was on the motorbike that scared him off!

It was banter but I can’t believe they didn’t stop to see if I made it through okay!

I made it up Lolo pass, entered Idaho and entered a new time zone. Triple whammy!