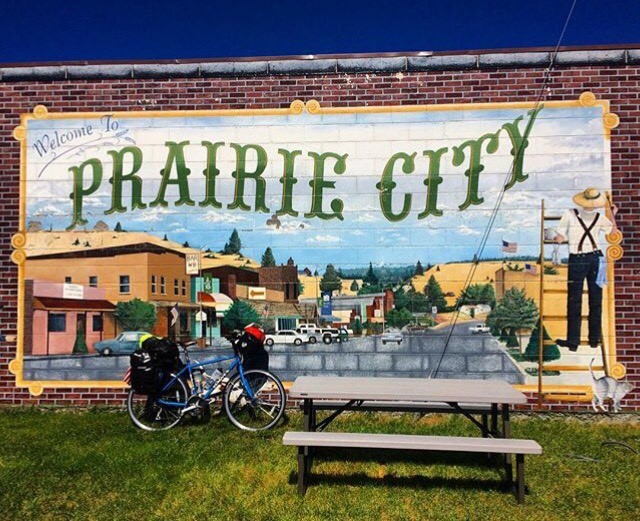 There were 3 passes to climb today so I set off early.

I completed all 3 and was treated to an easy coast down into the town I was camping in.

As I waited at some traffic lights a mad max convoy pulled up next to me. These vehicles were insane, they were old, covered in dust, beat up, jacked up on off road tyres and just gave off a post apocalyptic vibe.

Inside it turns out we’re American gypsies travelling to a rainbow gathering nearby. This particular convoy travelled from the east coast and picked up any hippies along the way.

The driver I was speaking to was filthy, dreadlocked and covered in weird face tattoos. His van was filled with people sleeping on each other and dogs sleeping on top. It was amazing to see these people, I would have taken a picture but my gut told me not to.

These people were a part of thousands heading for one national park which was to become their home for the next few months until the eclipse takes place in August. The police are aware of it now but no one knew where it was going to take place.

A scouting party of the “leaders” in the rainbow family chose this place months in advance and it was communicated to the rest of them on the down low.

Now the police have set up a base, a mobile court (with judge) and a prison, crazy right!?

Anyway an hour after I first met the convoy I saw them outside a gas station trying to get free gas (petrol) lolz.

In the final 10 minutes of cycling today I thought I rode over a stone that got caught in my tyre tread, it never fell off so I stopped to flick it off. Turns out I have a bit of wood sticking out of my tyre! It’s not losing air so maybe it missed the inner tube, all I know is that I’m not pulling that piece of wood out haha.