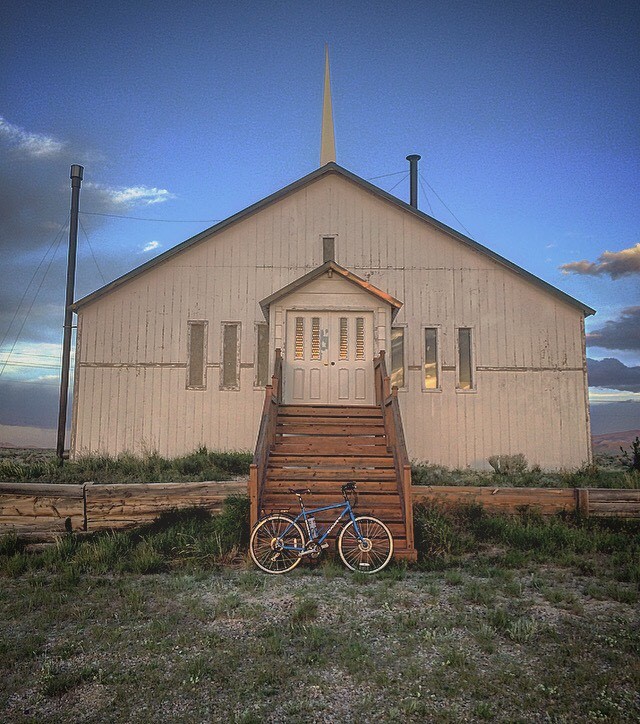 I woke up to blue skies and a free coffee from the campsite office.

I told the girl working there where I was headed and she said “ohhhh, you’re going through the dead zone”.

I asked her what she meant and she told me there was just about no civilisation for the next 130 miles. Oh great fanx.

With that in mind I stocked up in Rawlins. The bloke in the petrol station was also a delight to talk to. He informed me that cyclists have died on this stretch of road as they have seen rattle snakes last minute and swerved out into the road to dodge them and have been flattened by the big fuel trucks that hurtle down the road. Oh great fanx.

With all of this fresh on my mind I set off for the apparent gauntlet.

The day was a success, no “rattlers” and I’m alive 70 miles later I made it to an outpost called Jeffrey City.

The “city” used to be booming in the 80’s when they discovered Uranium and began mining. The city never slept as 5,000 miners worked in 3 shifts over a 24 hour period so apparently the 3 bars in town were always buzzing.

Fast forward to today and the town has a population of 41 and there is just one bar open along with a church.

Signs of the past remain with an abandoned ghost town including a grocery store, miners accommodation, and even a bowling alley. Everywhere is boarded up now and the place is so eerie.

Those that remain there struggle with a 120 mile round trip to go food shopping, and every summer there are swarms of mosquitos making it too uncomfortable to be outside.

I stayed in the church which was heaven sent as the Mosquitos were out of control. Luckily there were 4 other cyclists heading east so I had company for the night.

Went for breakfast in the bar and at around 9am the locals were getting back on it, or maybe they never got off it last night?

A uranium mining town that was a mixture of The Hills Have Eyes and I Am Legend (I’m Will Smith obvs).