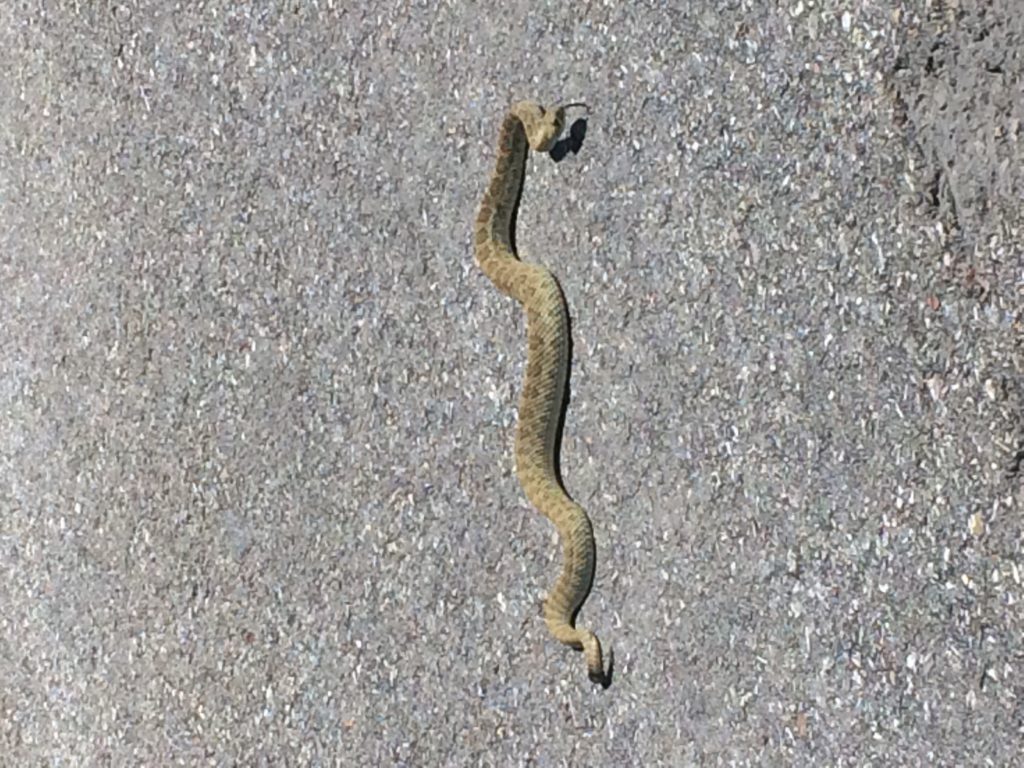 Today is the second and final day up in the 130 mile dead zone.

I set off after a double chilli burger at 9am. The locals were up and already boozing, or maybe they just never went to bed.

I got pedalling through the barren landscape and was complaining to myself about the headwinds that had returned.

I was on autopilot daydreaming about having an engine but 1 hour in I was rudely brought back to reality. I heard a loud rattle and I looked down to see what it was, jeepers it was a coiled rattlesnake!! By the time I heard it I was already on top of it and I swerved missing it by much less than a foot!

It’s ironic that after the bloke in Rawlins told me about cyclists swerving into the road I did the exact same thing, luckily there were no trucks to run me over.

Thank god the “rattler” didn’t strike my leg. Those things have the worst venom and I was a whole day away from the next town, I would have definitely been brown bread. Damn I was so close to this snake and I clearly upset him!

I got off the bike and was full of adrenaline, I paced up and down for 5 minutes saying things like “ohhhhh fuck me” and then I got the camera out to document my encounter. The way it moved made me shiver, I guess we are evolved to be petrified of snakes.

For the rest of the day I panicked over any snake shape objects on the hard shoulder. The worst thing was seeing a sand coloured bungee cable as they are the most snake looking things.

After a lunch break I had calmed down but before the sun set I had an identical encounter with an even longer/fatter rattle snake!!

My nerves are now in tatters and I need to find somewhere that doesn’t have snakes. I finally made it to the end of the dead zone and didn’t die, oioi!

I set the tent up and checked three times that the door zip was done up fully, no snake sized gap.

Another day another dollar.