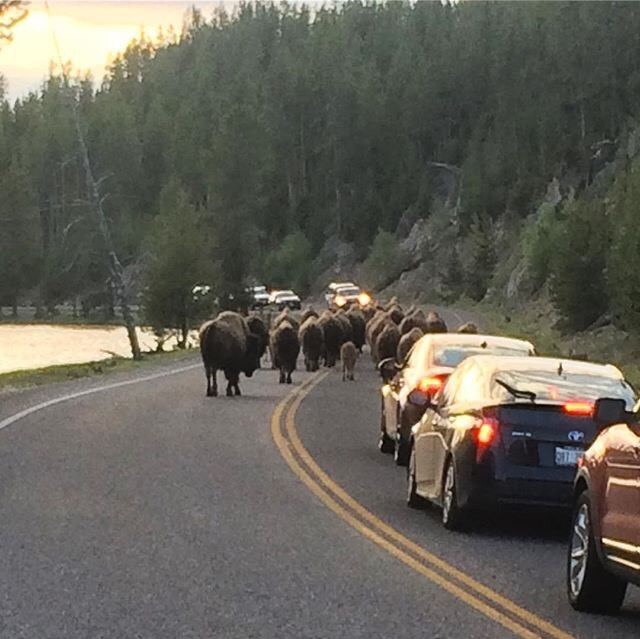 A lot happened today so be prepared for a big post.

I set off a little late as I wanted more potato salad from the shop. I was on the road by 11:30am and planned to do 50 miles to the next camp.

After I could eat no more chips I went to the camp reception to check in but it turns out the site isn’t open for the season yet, disaster!

They were really helpful however, they phoned the next campsite down the road and confirmed that they were open and that they had room for me. Now I needed to cycle a further through Yellowstone to make it to the camp.

I was advised not to travel at night as that’s when the big animals start wandering about onto the roads. By the time I set off again it was 6pm, sunset is at 9:30pm and I had 30 miles to cover, shitty Norah I don’t like this pressure.

My legs were already losing power and now I had some hefty climbing and a time limit before sundown. I was sweating my box off and got through my water soon enough.

My route went past Old Faithful so I stopped to take a look. It goes off every 90 minutes and I was just in time. Saw that go off up into the air then set off straight away.

Now the sun was setting over the mountains and I made it to a massive open flat land where some cars were pulled over. Cars pulled over typically means an animal sighting so I approached with caution. Once I got there I saw a lone wolf walking across the flat land with the sun setting behind it…unbelievable.

I continued my time trial and it was now dusk, so I put the hi viz on and fired up the back light on my bike.

Soon enough I was at a massive car queue, Christ I’m running out of daylight hours so I headed to the front.

Once at the front I saw what the hold up was, a herd of Bison! I queued for about 30 minutes with a swarm of mosquitos so I was like fuck this. A car window rolled down and the people inside gave me repellent which was so nice.

Three cars off the front another window rolled down. The bloke inside offered to be my car shield to make it through the herd and I agreed, soon enough we were now at the front of the queue.

The Bison were trotting and the ranger truck managed to get all of them on the left hand side of the road so our gap appeared.

We started our advance but at the last minute a large male swung right with some other bison following him. Within seconds I was now smack bang in the middle of the herd. The situation was now out of control and I couldn’t go back as there were Bison behind me, at this point I really regretted trying to get through.

The Bison were now running next to me and I could have reached out and touched one of their massive heads, I’m just waiting to be smashed against the car by one.

A miracle happened and the Bison split so a gap appeared, the bloke shouted to pedal and I shiffffffffffffted to keep up with him and we were through!

We were cheering and he honked his horn, the adrenaline was pumping through me massively. I made it to the camp and although I was relieved I was also annoyed that I put myself in that situation. Even the ranger pulled over at the campsite and told me I was lucky.

Dan don’t be a donkey!