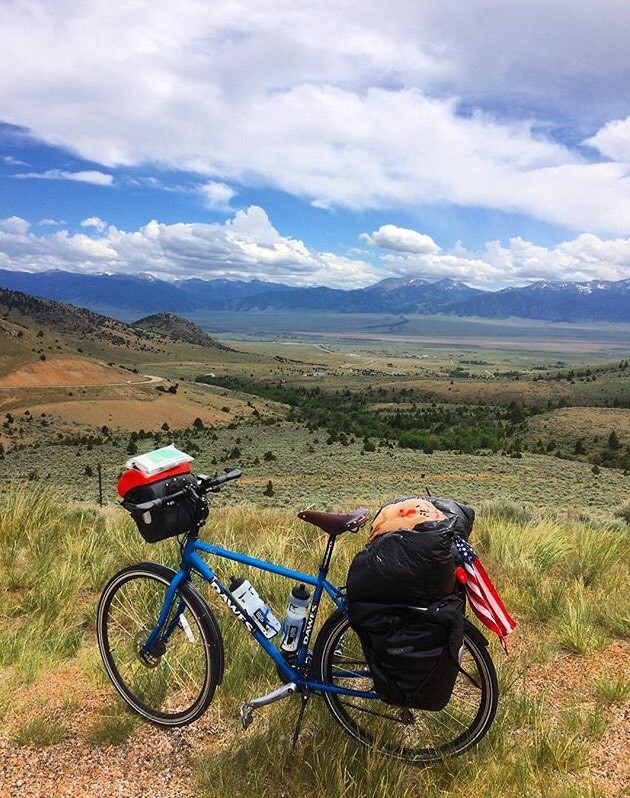 I slept so well and in the morning drank coffee and chatted with Amalia and her friends.

Amalia was heading out and her passing gift was an actual headlamp! I tried to make her keep it but I’m the end she won and I’m now the owner of a purpose builder head torch. Thank you for everything Amalia!

I set off and climbed the 2,000ft in a few hours, once I made it to the top I took a break to enjoy the views and the satisfying feeling of having pedalled up there.

The journey continued and to my west dark, dark clouds were coming my way.

1 hour later and I’m now in the worst storm I’ve ever been outside in. It started with sideways rain and wind with rumbling thunder. Next was large hail that hurt my face and hands and the cherry on the cake was lighting touching down all around me.

I was around 10 miles away from Sheridan and it was that familiar feeling of panic I had at that mountain pass a few weeks ago.

I had no choice but to keep going forward and the bolts of lighting were flashing up all around me. The thunder was cracking as soon as each bolt touched down, I was just waiting for one to come down through my helmet.

I made it into the town and the roads were flooded. I just needed to get inside so went to the first shop I saw. The staff in there looked at me and started laughing because I was in a right two and eight. They gave me a free coffee and told me about a motel across the road.

I checked in and had a 1 hour sit down shower, it could have been a music video for a sad song I reckon, perhaps Cry Me A River with Timberlake.

After that I slept a few hours (see this ordeal wiped me out!).

I woke up and went down to the restaurant, where I bumped into Tina from the store. She gave me an American flag that had been signed by everyone at the store which was so nice, I think they felt empathy after seeing me roll into town like that. I just continue meeting the best of every town I arrive in, thank you!

I just ordered food and it turns out Tina put money behind the bar to cover it. Tinaaaaaaaa!?